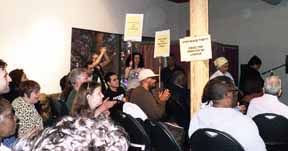 As a worker, what would you do if your employer robbed you of your wages that you rightfully worked hard for? Would you walk away and look for another job or would you stand up for your rights, challenge your employer and fight for your hard earned money?

Stop wage theft; stand up for your rights; and fight for workers’ rights.  These intense messages, conveyed by workers and their supporters to all ‘wage thieves’ reverberated throughout the Workers' Action Centre’s (WAC) campaign launch on May 13th in Toronto, amid supporters, trade unionists, and community activists.

Hosted by UFCW Canada community ally Workers' Action Centre, the Stop Wage Theft Campaign highlighted fearless men and women, many of whom are migrants and newcomers, who spoke about their repressive work experiences that left them flat broke.

Each speaker recounted how they were either discreetly or deliberately cheated by their employers of their paycheques; and that instead of these wage thieves being punished by the government, it is the cheated workers who have had to struggle in the court system to get what they are owed.

For instance, Cesar, an industrial painter, is currently fighting his employer Com-Kote.  Since 2007, his employer had paid him only $4,000 out of the $18,000 that he is owed.  According to Cesar, there is little hope that he will recover his remaining wages. There is little or no penalty for employers like Com-Kote;  a company that is alleged to be a repeat violator.

Deena Ladd, Coordinator of WAC says, "We need the Ontario government to take urgent action to address unpaid wages facing workers and lack of protection in Ontario workplaces. Workers should have the confidence that when they go to work they will get paid – that all workers should have the right to a basic floor of protection.  Workers are saying we are not going to remain silent on wage theft anymore!”

During the campaign launch, WAC also presented a video compilation documenting real accounts of WAC members responding to employer advertisements looking for workers.  Scenes showed employers on the other end of the phone immediately asking workers to pay exorbitant fees in exchange for a job; or workers being asked to claim themselves as self-employed so that the employer would not have to pay into Employment Insurance or other benefits.

Another video documented the struggle of Cesar (mentioned above) and other painters of luxury condos who have been fighting for their unpaid wages for many years from Com-Kote.  The video highlighted workers speaking out about their working conditions; the lack of enforcement by the Ministry of Labour; and WAC challenging Com-Kote on the violations.

WAC also released a new research report, Unpaid Wages, Unprotected Workers which surveyed workers who were immigrants, low-waged, and who worked at a range of precarious jobs. The research revealed that 20% of those surveyed earned less than minimum wage; 64% made less than $12.50 per hour; 39% did not get paid overtime; and only 18% got any sick days.