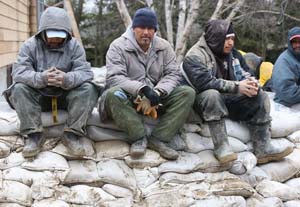 Hundreds of Mexican migrant farm workers across southern Manitoba are facing a huge hit in crucial family income and possibly being repatriated in the wake of floods and an emergency breach of a dyke near farms in the Portage la Prairie area.

This time of  year the migrant workers are typically planting and harvesting produce at a number of large, industrial-scale farms and packing houses in the area. But this is no typical year; heavy rains and the breached dyke have left the farms many live and work at deluged by water.

Less than a kilometre south of the breach, more than 140 migrant workers from Mexico are contracted to Riverdale Farms.  The 1,200 acre market crop agricultural operation is owned by Doug Connery, the brother of  Ed Connery; a former minister of labour under the Filmon Progressive Conservatives .  In the days leading up to the breach, the migrant workers helped build sandbag walls around Doug Connery's house, but with the crop lands now flooded, there may be no other work to do. Repatriation to Mexico may be next and the migrant workers at Riverdale are not alone.

Altogether more than 500 migrant workers make up the backbone of the agriculture workforce in the fields of southern Manitoba. Many have worked in the Manitoba farming industry for decades; returning to work each season under a federal agreement between Canada and the sending countries called the Canadian Seasonal Agriculture Workers Program (CSAWP).  But without work or a place to live, the fate of migrant workers has been set adrift by the flood.

So like other farms and businesses in the area hit hard by the flood, the workers are asking for protection and compensation like other members in the community; including temporary housing and emergency funds to make up for lost income. The federal CSAWP program does not provide income protection, so while farms and employers will see their losses recouped, the migrant workers could be facing repatriation instead. A lack of response by the Harper government to the plight of the migrant workers has added to the flood crisis now facing the Manitoba community and government.

“As Canadians we have to stand together and help all those harmed by the flood, including  the people who work on farms under CSAWP,” says Wayne Hanley, the national president of UFCW Canada — Canada's largest private-sector union which represents migrant farm workers at a number of  locations in Quebec and British Columbia.  "These workers were recruited to Canada by the federal government, so it has a responsibility to do the right thing for the CSAWP workers. Migrant workers are vital members of the Manitoba farm community, and  the Harper government  should step in to make sure they're not treated like they are invisible and tossed overboard.”

Across Canada, more than 40,000 migrant and temporary foreign workers are contracted by hundreds of Canadian agricultural operations. For more than two decades, UFCW Canada  has led the campaign to secure the same labour and safety rights for farm workers that all other workers have. In association with the Agriculture Workers Alliance, UFCW Canada operates ten agricultural worker support centres across Canada. In 2010 the centres handled more than 35,000 inquiries from domestic and migrant farm  workers regarding employer abuse, health and safety concerns, and workplace and housing issues, and unjust employer reprisals and repatriation.