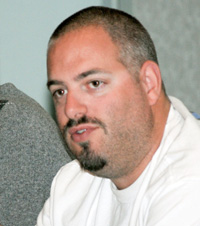 UFCW Canada national representative Devin Yeager is one of 15 Albertans who will sit on a new panel established by the Ed Stelmach government to look at ways to improve the safety of the province’s agriculture industry, which produced 22 deaths in 2010 – up from 13 the year before.

As the only labour representative on the province’s newly formed Farm Safety Advisory Council (FSAC), Brother Yeager is focused on making sure the needs and concerns of workers are a priority for the panel. “The sad fact of the matter is that Alberta remains the only province in Canada that refuses to recognize the fundamental health and safety rights of agriculture workers,” says Brother Yeager referring to the multi-billion dollar industry’s exclusion from the Alberta Occupational Health and Safety Act.

“There is no good reason why health and safety rights cannot co-exist with the industry’s need to make a profit, and my participation on the council will be focused on making sure farm workers have the same protections as other workers in the province,” adds Devin, who was nominated by UFCW Canada Local 1118 President Albert Johnson to serve as labour’s voice on the newly formed panel.

National representative Yeager works closely with the Agriculture Workers Alliance, and has played a key role in spearheading the campaign for migrant and temporary foreign worker rights in Alberta. Prior to joining the National Office, Devin served the union as a member-activist while working in the meat-packing and distillery industries, and as president of former UFCW Canada Local 194D.

“UFCW Canada is always eager and willing to participate in any process dedicated to improving workplace health and safety conditions,” says UFCW Canada National President Wayne Hanley. “At the same time, we can’t help but have a skeptical view of the formation of the FSAC – given the Alberta government’s stiff refusal to do the right thing by immediately implementing the Barley recommendations,” adds Brother Hanley referencing the 2009 findings of a public inquiry into the workplace death of farm worker Kevan Chandler that called for the extension of the province’s Occupational Health & Safety Act to include the agriculture industry.