Calling all Activists: help stop the attack on labour rights! 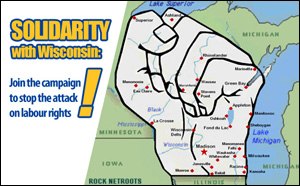 UFCW Canada is calling on all activists and friends to help stop the vicious attack on labour rights currently taking place in Wisconsin and other American states.

UFCW members in Wisconsin and across the United States are standing up with our union brothers and sisters to fight back against the attacks on union members' rights. While the public sentiment is generally on our side, maintaining positive media coverage of this debate is an important part of winning the legislative battles.

Across North America, workers are being scapegoated for the economic distress in our cities and states. Politicians supported by corporate interests are attempting to eliminate the voice of workers on the job and in political and legislative arenas. Some American states have already initiated right-to-work measures, as well as measures to eliminate the ability of public employees to have a union and bargain collectively. The united labour effort to defeat these measures needs your voice.

The online versions of many local, regional, and national papers have comment sections below each story. Not only do we need to make sure the worker perspective is included in the story – it's just as important to make sure that we are heard in the comment section. The right-wing corporate agenda has an army of people out there ready to spew anti-worker talking points on every comment board from the New York Times to the smallest online publications.

The pro-worker online campaign to stop the attack on labour rights needs your help!

Here's what it involves:

When we see a story that demands a response, we'll send you an e-mail, so you will have a chance to post a pro-worker comment as soon as you can – not a day or two later. We will also let you know about other opportunities for online action, like voting in an online newspaper polls.

If you are willing to lend your voice to this effort, please e-mail [email protected] and say, "You can count on me to defend working people," and we will add you to the list of news story recipients. Also ask family and friends to join our list.

Please take every effort to comment on any news stories that address anti-worker measures, and to inform the general public on the short-sightedness of these anti-worker initiatives.

We must, as Canadian union activists, add our voices to the growing public outcry over the vicious attack on labour rights by republican governments in Wisconsin and other American states. Protecting our labour rights as workers in Canada starts with making a stand south of the border. We need to be very vocal in challenging the anti-worker ideas that fuel the right-wing corporate agenda, and by organizing online we can make a real difference in keeping this destructive political trend at bay.

As workers and UFCW Canada members we have a voice, and together our voice is strong!