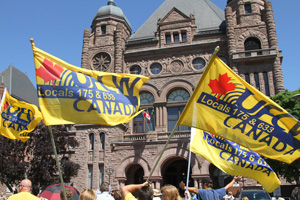 UFCW Canada is calling on all activists to join the campaign to make sure a new anti-scab bill becomes law in Ontario.

Bill 45, Labour Relations Amendment Act (Replacement Workers), was introduced by NDP MPP France Gélinas (Nickel Belt) last April and easily passed First Reading with a vote of 32 for and three against. The new anti-scab bill will go before the House for second reading on March 31.

The legislation would ban companies from hiring replacement workers to take striking workers' jobs when those workers are involved in a labour dispute, either a strike or lockout.

“Every year thousands of workers across Ontario settle union contracts with their employers without any kind of work stoppage,” says UFCW Canada National President Wayne Hanley, drawing attention to the fact that 97% of the province’s collective agreements are negotiated without work disruptions.

“But the right to strike is something we need to protect as workers, and as UFCW Canada activists we need to use our strength as the country’s largest private-sector union to lead the fight to make sure that our rights aren’t watered down by the right-wing agenda,” adds Brother Hanley.

A law banning the use of temporary replacement workers has existed in Quebec since 1978 and in British Columbia since 1993. Ontario also gained anti-scab legislation in 1993, when the NDP was in government, but it was clawed back in 1996 when the Mike Harris Conservatives gutted the province’s Labour Relations Act.

In order for a bill to become law it must pass second and third reading in the Legislature.

UFCW Canada activists can play an important role in the Bill 45 campaign by printing a petition; asking 10 friends to sign in support; and by mailing the collected signatures to: