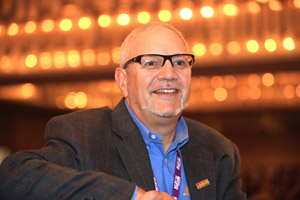 After 32 years of service to the labour movement, UFCW Canada Local 1000A president Kevin Corporon will be retiring effective July 1, 2011.

“I have had the good fortune and have been proud to work for and on behalf of our great union, activists and members,” says Brother Corporon.

In 1974 he became a shop steward, launching him on a journey that would see him help tens of thousands of workers across Canada. After serving on the bargaining committee in 1974 and being elected divisional president for Local 114-2 in 1975, Kevin was hired as a full-time union representative with the Amalgamated Meat Cutters in 1979.

In 1985, Brother Corporon began working for Local 1000A as Executive Assistant to the President, and in 1987 he was elected Executive Vice-President.

“Kevin’s four decades of activism and outstanding service to workers and their families has made a truly significant difference for generations of UFCW Canada members,” says UFCW Canada National President Wayne Hanley.

In addition to serving UFCW Canada Local 1000A as president, Brother Corporon has also provided UFCW members with strong leadership at the national level as a member of the union’s Canadian Council, and internationally as an International Vice-President.

“On behalf of UFCW Canada’s 250,000 members, I would like thank Kevin for his exceptional leadership and for dedicating himself to UFCW Canada, the labour movement, and improving the lives of workers through collective action,” adds Brother Hanley.

Local 1000A’s Executive Board, in accordance with the UFCW constitution and the local union’s bylaws, has elected Pearl Sawyer to serve the balance of Kevin’s term, which ends December 31, 2012.