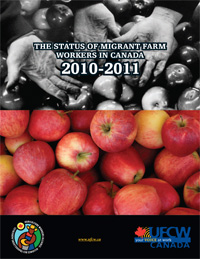 The 2010-2011 Status of Migrant Farm Workers in Canada report is published by UFCW Canada and the Agriculture Workers Alliance (AWA). For more than two decades UFCW Canada has been a leading advocate for farm workers' rights, and in association with the AWA operates 10 agriculture worker support centres across Canada.

The latest report is the seventh released since 2003. The 25-page report exposes federally operated migrant farm worker programs as rife with human and labour rights violations — and those programs are expanding with the assistance of the Harper Conservative government.

In 2010, more than 40,000 migrant workers toiled in the Canadian agriculture industry. If they raise any workplace, safety or housing concerns, migrant workers are typically repatriated and blacklisted from ever working in Canada again.

“The denial of human rights should not be the foundation for Canada’s food supply system,” says UFCW Canada and AWA president Wayne Hanley. “But as the report details, that’s exactly what’s happening to migrant farm workers. Even worse, it’s happening with the blessing of the federal government which turns a blind eye to the dangers and abuse migrants are forced to accept if they want to keep their jobs.”

The 2010-2011 report is based on interviews, surveys and other frontline information from migrant workers, gathered through the ten agriculture worker support centres operated across Canada by the AWA. Last year alone, the centres handled over 35,000 requests for AWA assistance and advocacy.

UFCW Canada is the country’s largest private-sector union with over 250,000 members across Canada working primarily in the food production, processing and retail sectors — including migrant and domestic agriculture workers at various locations in Quebec and British Columbia.