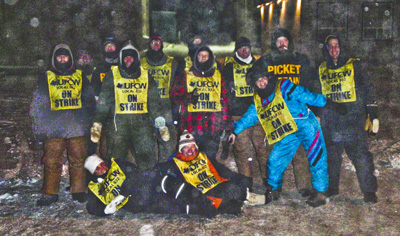 The 22 UFCW Canada Local 832 members at the Malteurop facility in Winnipeg continue to hold strong on the picket line, since voting down the company’s last offer on December 9.

The support from the community has been tremendous as many people, friends, family and the labour movement have come to join the workers walk along Dugald Road in Winnipeg.

Support from CUPE, CAW, Manitoba Hydro, Winnipeg firefighters, the Manitoba Federation of Labour, as well as and many small businesses in the area has been greatly appreciated.

UFCW Canada Local 832 has kept in contact with the conciliation officer, who has indicated that currently the employer is not interested in returning to the negotiating table.

Because of the strike, the Holiday party scheduled for December was cancelled, but that didn’t dampen the holiday spirit and solidarity on the picket line Christmas Eve and throughout the holiday season.

The holiday get-together has now been rescheduled for members and their families for a day of fun on Friday, January 14.