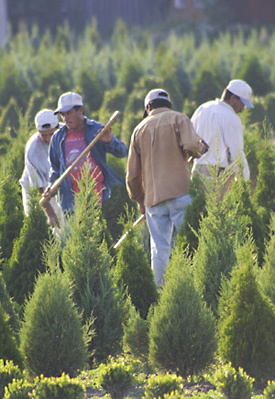 The Sidhu & Sons workers are here under the federal government's Canadian Seasonal Agricultural Workers Program (CSAWP), and a unique feature of their new Collective Agreement is that it is specifically for the migrant agriculture workers at Sidhu & Sons, rather than the entire workforce.

"Because of UFCW Canada's perseverance in the fight for justice and dignity for migrant agricultural workers, we have successfully achieved the first contract specifically for migrant farm workers," said Ivan Limpright, President of UFCW Canada 1518.

"This did not come easy," said Limpright. "While workers at Sidhu & Sons had long ago expressed interest in the union and joined the union, it took almost three years of hard work to get this agreement in place."

"There were many challenges and hearings at the B.C. Labour Relations Board, and ultimately we were able to win a precedent-setting decision granting migrant agriculture workers bargaining recognition under the provincial labour code, and we finally concluded negotiations with a mediated settlement for the new Collective Agreement."

Under the new collective agreement, UFCW Canada Local 1518 will be representing the migrant workers, primarily from Mexico and Jamaica, who come to Canada each year under the CSAWP program to work for Sidhu & Sons Nursery.

"I want to congratulate the members at Sidhu & Sons," said Limpright, "and we are really pleased this agreement has been reached. This is another good step forward, and another positive signal to other farm workers, domestic and migrant alike, that joining UFCW Canada makes sense."

"This is a great victory for the Sidhu workers who exercised their Charter rights to join a union and bargain collectively," said UFCW Canada National President Wayne Hanley. "And the Charter is not stopped by provincial borders," said Hanley, "so it is shameful that Ontario and Alberta continue to trample the human rights of agricultural workers there by blocking their access to unionize."

UFCW Canada in association with the Agriculture Workers Alliance (AWA) operates ten support centres across Canada for agriculture workers. UFCW Canada is also Canada's largest private-sector union with over 250,000 members across the country working in every sector of the food industry from field to table.