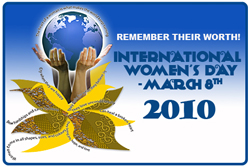 As we recognize the achievements of women around the world, and especially in Canada, on International Women’s Day (IWD) on March 8, there is much to celebrate – and much more to yet be achieved.
Around the world, oppression of women continues to take place. There is systemic discrimination still, even in Canada, as well as horrifying practices in many places in the world, including forced marriages, marital rape, genital mutilation, and ritual murder and suicide.

In Canada, we can be thankful that these practices are rare (yet not unheard-of). But Canadian women still have much to gain, and they are losing ground. In the 15 years since the UN Fourth World Conference on Women, held in Beijing (see DIRECTIONS 10.08), we have been sliding backward on gains that had been taken as “given” in 1995. And we have Conservative governments, especially at the federal level of Stephen Harper’s Tories, to thank for that.

There has been a sharp decrease in institutional and political support by the government of Canada for the promotion and protection of the human rights of women and girls during the period from 2004 to 2009, as is outlined in the recent report, Reality Check: Women in Canada and the Beijing Declaration and Platform for Action Fifteen Years On, A Canadian Civil Society Response.

• Elimination of the phrase “gender equality” from the mandate of Canada’s primary institution responsible for gender equality in Canada, Status of Women.

• Closing of 12 of the 16 Status of Women offices, on the “principle” that women’s and men’s issues do not need to be separated.

• Elimination of funding to the court challenges program, a program created to provide assistance to court cases related to equality rights guaranteed under Canada’s Constitution

• Statements by the minister of foreign affairs indicating a deliberate disengagement from international norms, including humanitarian law and women’s human rights

• Senior policy advisors within the office of the Prime Minister with strong links to anti-feminist organizations.

Canada’s achievements toward women’s equality in recent years have been considerable. For example, women’s participation in higher education has increased since the Beijing conference. Yet, from 2004 to 2009, women’s achievements in all 12 areas of critical concern identified in the Beijing Platform for Action have slowed or been turned back.

Canada no longer compares favourably with other nations in assessments of gender equality and the gender gap. Many organizations that provided women and girls with an opportunity to bring their concerns forward have been eliminated, or gagged by new funding regulations.

Nonetheless, UFCW Canada women remain undeterred. We recognize the strength that UFCW Canada women members bring to their workplaces, their union, and to their commitment to local union women’s committees across Canada, as well as to the National Council Women’s Advisory Committee. They are leaders in the movement, and we are inspired and stand in solidarity with them.

As a forward-looking trade union – with more than half of its members women – it is incumbent on UFCW Canada to raise its voice on behalf of women to say, No More. The backsliding of the Harper Conservative government cannot be allowed to continue. We have not yet nearly achieved equality for women in Canada, and programs must be restored to continue this important work.

Equality may still be a distant goal, but we will all benefit from reaching it.