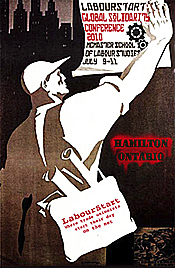 Online campaigning is a vital complementary media component for today’s social justice activists, and over the past three years UFCW Canada has been leading the labour movement’s digital charge.

In recognition of the union’s pioneering efforts on the internet, UFCW Canada was recently invited to contribute to a workshop on online campaigning at LabourStart’s first conference in Canada.

LabourStart maintains a very large international network of activists and serves as a daily news source for trade unionists around the world.

The conference, held at McMaster University in Hamilton, Ontario, drew trade unionists and social activists from a number of countries who took the opportunity to share experiences, debate strategies and discuss the value of new technologies.

More and more activists and progressive organizations are seeing online campaigning as a key part of their organizing and outreach efforts,” says Victor Carrozzino, executive assistant to the UFCW Canada National President.

“The potential of the internet is boundless and with little to no budget progressives can leave a significant impression with employers, non-organized workers and the general public,” says Brother Carrozzino who walked conference participants through the development of three successful UFCW Canada campaigns:

Harvest of Death, Save the Circle and GEE20 News.

UFCW Canada’s outreach to migrant workers — including new digital efforts— was also on the LabourStart agenda.

“For more than two decades UFCW Canada has led the campaign for justice for migrant and temporary workers,” says Brother Mehta.

“We continue to be there for them — with expanded access — in the language they speak with the information they need in person, on the web and online.”