LabourStart, the world’s leading information source for labour activists, has added its voice – and its vast network – to the growing number of individuals and organizations who are telling Alberta Premier Ed Stelmach to End the Harvest of Death!  Started as an alternative media outlet for an international audience of activists, Labour Start has become renowned for its ability to pressure governments and corporations by mobilizing large groups of people online in support of progressive causes.

Since LabourStart joined the Premier Stelmach: End the Harvest of Death! campaign at the beginning of April,  the campaign page www.ufcw.ca/harvestofdeath has experience an extra boost of traffic, and a flurry of protest letters have been sent to the Alberta premier’s office. Plus, the additional momentum contributed by LabouStart builds by the day.

The End the Harvest of Death campaign was launched over a year ago in the wake of the workplace death of farm worker Kevan Chandler and a public enquiry called by the Stelmach government into the the reasons why so many people die while growing our food.  Ignoring the enquiry’s findings, the Alberta government refuses to join other Canadian jurisdictions by including agriculture workers in the province’s Occupational Health and Safety Act. The campaign simply asks the premier to show some real leadership by ordering end to Alberta’s deadly discrimination. 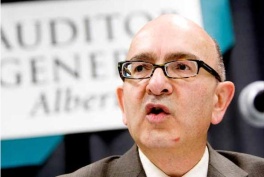 Adding to the amount of public attention generated by LabourStart’s support of the Harvest of Death campaign is a damning report issued by Alberta’s Auditor General on April 14. In his report, the province’s acting auditor general, Merwan Saher, said, “The impact of workplace injuries, illnesses and fatalities reaches well beyond workers and their families and leads to broader negative economic and social consequences." He then blasted the Ed Stelmach government for refusing to act against employers who ignore the health and safety needs of workers.

“In addition to Justice Peter Barley, we now have the Auditor General of Albert telling the premier to get with the program when it comes to health and safety conditions,” says UFCW Canada National President Wayne Hanley. “How many more experts have to tell the Alberta government ‘we have a major problem here’ before Ed Stelmach starts showing some leadership on this issue by doing the right thing?”

UFCW Canada activists and supporters who haven’t already sent a message to Premier Stelmach, telling him to the end his deadly discrimination, can do so by going to www.ufcw.ca/harvestofdeath .