UFCW Canada and its three million union brothers and sisters in the Canadian labour movement have joined a growing number of concerned citizens in calling for a full public inquiry into the actions of the police and other security services during the recent G20 meetings in Toronto.

The Canadian Labour Congress (CLC) and its affiliates are strongly urging the Prime Minister and the Premier of Ontario to immediately establish a formal investigation into what many people are describing as an excessive use of state power.

"The public has a right to know why civil liberties were summarily suspended and why a number of peaceful protestors and by-standers were beaten, arrested and detained," says UFCW Canada National President Wayne Hanley. 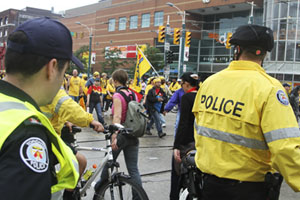 The labour movement and its allies are also demanding to know why the federal government spent over $1 billion of the public treasury on a heavy-handed security program, and why the provincial government colluded in creating Fortress Toronto by quietly allowing the expansion of arbitrary police powers under the Public Works Protection Act.

UFCW Canada activist are encouraged to contribute to the call for a public inquiry by speaking with their elected officials, posting social networking comments, and writing letters to the editor.