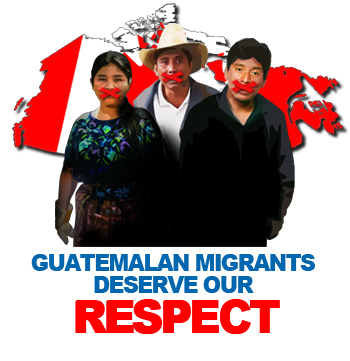 UFCW Canada and the Agriculture Workers Alliance (AWA) are spearheading a new campaign to denounce the systematic abuse and violation of the rights of Guatemalan farm workers who come to Canada through the Temporary Foreign Workers Program (TFWP).

The campaign, called No More Injustice and Oppression against Migrants!, calls attention to the illegal treatment of Guatemalan workers and the degrading terms of a contract imposed on them by FERME, an employer association, and the International Organization for Migration (IOM) – an intergovernmental agency mandated to “promote humane and orderly migration for the benefit of all,” according to its website.

“Over 4,000 Guatemalan workers come to Canada every year to harvest our food and make one our most important industries possible,” says Andrea Galvez, coordinator of the AWA Centre in Saint-Remi, Quebec, where many Guatemalan migrants work. “But we repeatedly hear from Guatemalan migrants who are degraded and demoralized by the individuals and organizations who cash-in on the Temporary Foreign Workers Program.”

Workers are recruited in Guatemala by the IOM and must ante up a $400.00 deposit – a huge amount of money for the average Guatemalan – before they’re allowed to work in Canadian fields.  If the worker refuses to obey the outrageous terms listed in the contact, he or she can be terminated and the deposit is not returned, which is a terrifying prospect for workers because they generally borrow from friends and family to get the cash.

Although the TFWP is administered by Human Resources and Skills Development Canada (HRSDC), the contract imposed on migrants does not allow the ministry to intervene in the terms of work. Once the contract is signed, the worker is brought in and left to the mercy of employers.

UFCW Canada and the AWA are strongly urging Canadian authorities to open an official investigation into FERME and the IOM’s management of the project, and are calling for immediate and substantive reforms to the TFWP.

All activists are encouraged to join this fight by sending messages and by using their social networks to help spread the word by posting links to the campaign page.