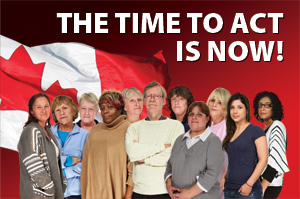 Toronto – March 7, 2013 – With the opening of the first three Target stores in Canada, more than 25,000 former Zellers workers continue to be left out in the cold by the American retail giant. On March 5, Target Canada opened their first-ever Canadian stores to the public - in Milton, Guelph and Fergus, Ontario. Since acquiring 189 Zellers stores more than a year ago, Target has consistently maintained that all Zellers workers would be terminated and their wage rates, benefits and years of service would not be recognized once their stores re-opened under the Target banner.

Due to mounting public pressure in 2012, Target announced that all Zellers workers would be granted a job interview. However, countless Zellers workers, many with decades of experience, report that they have been consistently turned down for employment without reason. Furthermore, many Canadians continue to feel that Target is a successor employer to Zellers.

"Promoting itself as the new friendly neighbour in Canada, Target has clearly failed to include the more than 25,000 Canadian workers who they threw out of work," says Kevin Shimmin, a UFCW Canada national representative.

UFCW Canada is a partner in the grassroots campaign Ask Target for Fairness, www.targetfairness.ca.

"The American corporation is also being extremely tight-lipped about how many actual full-time jobs will be created in their stores. Judging from the experience of Target employees in the United States, Canadians can expect mostly part-time, minimum wage jobs with little or no benefits at Target."

"With Target's total disregard for former Zellers workers," says Shimmin, "there will likely be just as little respect for new employees. Ask Target for Fairness will continue to build awareness about Target's treatment of Canadian workers."