Clifford Evans was working in a grocery store in his hometown of Guelph, Ontario in 1957 when he was recruited as a full-time organizer by the Retail Clerks International Union. He was then 19 years old. The union had 42 members in Ontario south of Thunder Bay and only 5,000 members in all of Canada, making it one of the smallest national affiliates of the Canadian Labour Congress.

Born in Toronto in 1902, Fred Dowling was a star semi-pro baseball player as a young man. No one could have then guessed that the crowd-pleasing second baseman would become one of the giants of the Canadian industrial union movement. In 1935, with baseball behind him, Fred moved to Chicago and found work in the hide cellar of giant meatpacker Armour Corp. where, as he said years later, “I learned what it's like to work in hell.” The conditions in the packinghouses and the human misery of the Great Depression turned Fred into a lifelong advocate for trade unions and democratic socialism.

Back in Toronto in 1937, Fred became involved with the CCF and the fledgling Canadian CIO union movement. As a $25/week CIO staff member, he worked on the United Auto Workers' epic organizing campaign at General Motors in Oshawa and several successful United Rubberworkers campaigns. In 1941, he was assigned to the near-dormant Packinghouse Workers Organizing Committee and quickly spurred meat plant organizing from coast to coast. When the United Packinghouse Workers of America was founded in Chicago in 1943, Fred Dowling was unanimously elected Canadian Director, a position he held until his retirement in 1972, even after the UPWA merged with the Amalgamated Meat Cutters and Butcher Workmen of North America in 1968.

During World War II, Dowling brilliantly maneuvered the Federal government and the "Big Three" Canadian meatpacking companies – Canada Packers, Swift Canadian and Burns Meats – into establishing a National Master Agreement system that gave unprecedented bargaining power to the union. When the federal government turned jurisdiction for labour relations back to the provinces following the war, Fred engineered a dramatic nation-wide packinghouse strike in 1947 that secured the master agreement system and turned the young union into one of the most militant in Canadian labour history. His organizing skills then turned to other sectors of the food processing industry: canning, poultry, dairy and others. In the late 1960s, Dowling launched what would become the massively successful organizing of the Atlantic fishery industry.

Fred Dowling devoted a great deal of his time and passion to the CCF and was a friend and close advisor to J.M. Coldwell, Tommy Douglas, Stanley Knowles and David Lewis. He was a key figure in the founding of the New Democratic Party in 1961 and was elected its first labour vice-president.

In his last interview a few weeks before his death in 1982, Fred Dowling summed up his advice to those who would carry on the work of him and other union pioneers: “As long as there is one worker who is exploited or mistreated, our work is not complete.”

2000 - Walmart workers in Jacksonville, Texas, make history by becoming the first Walmart employees to exercise their right to join a union.

2000 - Perdue chicken catchers join the UFCW to demand a voice on the job and a right to join a union.

2006 - Agriculture workers in Ontario finally granted the protections of the Occupational Health and Safety Act as a direct result of UFCW Canada lobbying and campaign efforts.

2014 - Walmart is found guilty by the Supreme Court of Canada for violating its employees’ rights. Walmart abruptly closed its store Jonquiere, Quebec after workers there voted to join the UFCW.

2018 – The “Fight for $15 & Fairness” campaign – supported by labour unions across the country, including UFCW – achieves its first victory in Canada, as Alberta becomes the first Canadian province to enact a $15 an hour minimum wage.

2018 – After years of advocacy from UFCW Canada and the Agriculture Workers Alliance (AWA), as well as a series of town hall meetings hosted by UFCW and the AWA, the federal government agrees to provide one-year open work permits for migrant and temporary foreign workers who have experienced abuse from their employer.

2019 – UFCW helps a Mexican farm worker in Quebec become the first-ever migrant worker to receive an open work permit in Canada. The permit was granted to the worker after he experienced abuse from his employer while working at an onion farm.

2019 – A major victory for ride hailing drivers is achieved when UFCW 1518 enters mediation with Lyft and Uber at the B.C. Labour Relations Board. 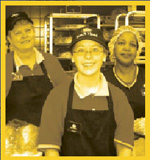 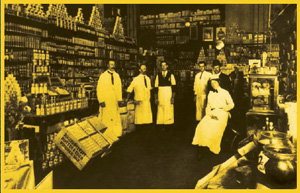 1816 - After the War of 1812, skilled trades, or “journeymen”, and workmen are recorded as meeting in secret meetings or “combinations” in Halifax, NS.

1832 - Toronto Typographical Union first organized, which would later become Local 91 of the International Typographical Union. The Toronto group first comes together under the slogan, “United to support, not to injure,” and their efforts are supported by William Lyon Mackenzie.

1850s - Starting in the 1850s, the Labourers’ Benevolent Association rules shipping ports “with rod and iron,” and shuts down shipping operations to attend funerals whenever a member dies on duty.

1867 - Knights of St. Crispin, an early international effort involving Canada and the United States, forms to regulate machinery, and the process of shoemaking in particular, after the massive production needs of the US Civil War (for army boots) led to the destruction of proud old crafts.

1872 – A Nine Hour League is formed in Hamilton, Ontario, joining earlier movements in the United Kingdom and the United States for a nine-hour work day. Prior to this movement, the workday was unregulated, and people stayed at work until the boss said they could go home.

1872 - Canada’s first union federation is attempted in Toronto with the creation of the Canadian Labour Union (CLU), but the effort is short-lived, lasting only six years until 1878.

1872 - Canada’s first prime minister, Sir John A. Macdonald, rams through the passage of the Trade Unions Act, which abolishes the practices of charging union meeting organizers with “conspiracy” against the state, but, at the same time, demands that people must “register” in order to be protected by the Act. Nobody registers, and the Act effectively becomes a dead letter.

1877 – Despite Macdonald’s seemingly progressive Trade Unions Act, “master and servant” laws still exist in Canada until 1877 (and arguably later), which allow the courts to send “disobedient” or absentee workers to jail at the boss’s request.