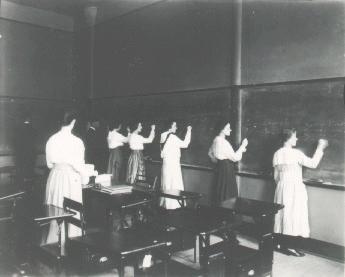 During this period, 15% of women aged 14 years and up were part of the labour force. Women worked mainly as domestic labourers, seamstresses, and teachers.

In 1907, Bell Operators go on strike to protest excessive hours on the job.

As part of this important strike, workers demanded shorter hours of work, a living wage, and an end to abusive treatment by shop foremen. Women workers also shut down mills for 10 days. Unfortunately the workers lost this strike, but their militancy later led to improvements in the industry.

In 1909, the Criminal Code is amended to criminalize the abduction of women. Until this amendment, kidnapping of any woman over 16 was legal, unless she was a heiress. Meanwhile, the maximum penalty for stealing a cow was higher than the one for kidnapping a heiress.

Quebec legislation cuts work hours for women textile workers from 60 to 58 hours per week. Other legislation follows to further limit the work week.

Women textile workers in Lawrence, Massachusetts go on strike, calling for “Bread and Roses." Bread and Roses comes to symbolize women’s demands for equality and dignity, and the “Bread and Roses” song becomes an anthem for Canadian women in the labour movement.

During WWI, women worked in munitions factories while men went off to war. This period saw an increase in women working in all sectors of the economy, including factories, offices, and stores. Not all women had equal access to work, though. Employers prefered single women and would say “mothers and wives need not apply." 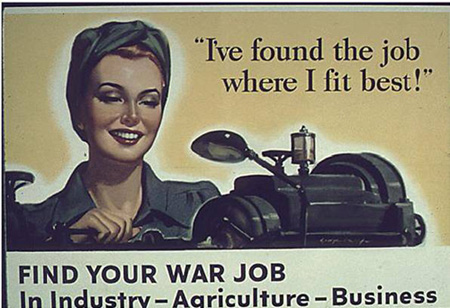