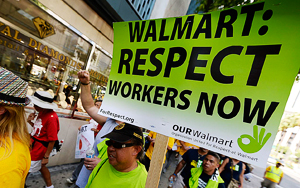 Bentonville, Arkansas – July 8, 2014 – A new survey conducted by Lake Research Partners in the United States shows that Walmart's mistreatment of its employees is harming the company's reputation among consumers and causing some of its most loyal customers to shop elsewhere.

The survey was conducted online and reached a total of 813 consumers over the age of eighteen, with a margin of error of 3.5 percentage points.

The poll discovered that U.S. consumers overwhelmingly believe that Walmart can and should provide better pay and benefits to its employees, and that the company's poor treatment of workers is prompting shoppers to visit Walmart less often. Specifically, the survey found that U.S. consumers believe Walmart should provide full-time hours and pay a living annual salary of $25,000, and that 29 percent of the company's most loyal shoppers would shop at Walmart more frequently if the company treated its employees better.

"UFCW has consistently recognized the threat that Walmart poses to our members and workers in general, and across North America our union has been steadfast in making the case that Walmart's bad jobs strategy is unsustainable," says UFCW International President Joseph T. Hansen. "That message is clearly gaining ground, as the Lake Research survey reflects a shift in thinking among U.S. shoppers, and shows that consumers increasingly understand that Walmart must change," Brother Hansen adds.

To read the full results of the poll, click here.