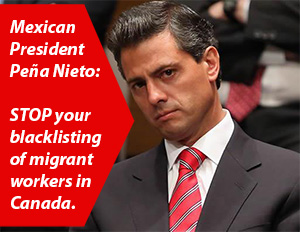 Mexico City, Mexico – February 19, 2014 – The NAFTA Summit, starting today in Toluca on February 19, leaves a bitter taste for Mexican migrant farm workers in Canada. To properly celebrate Barack Obama’s and Stephen Harper’s visit, Mexico has decided to relaunch its legal battle against the right of association for its own citizens in Canada.

Act NOW: Send a letter to stop the Blacklisting of migrant workers in Canada.

Twenty years after the signing of NAFTA, trade and investment in North America have grown exponentially. Unfortunately, the agreement has only served to create a precarious and vulnerable workforce that faces dire conditions of exploitation and discrimination linked to their status as non-citizens. Ironically, there seems to be a consensus among the three countries on migration: Mexican labour is disposable and does not enjoy any rights.

In 2009, Mexico faced charges of anti-union activity for conspiring with Canadian farmers to exclude SAWP (Seasonal Agricultural Workers Program) workers that dared to organize with UFCW Canada Local 1518. Back then, Mexico sought and obtained diplomatic immunity. However, nearly five years later, Mexico keeps appealing every decision of the Canadian courts, trying to remove all record of evidence of their anti-union activity, including leaked documents and testimonies of former consular employees. This last appeal, announced last Friday, February 14, will once again serve to deny these workers their fundamental right of association enshrined in the Canadian, Mexican and international standards.