400-plus warehouse workers at Aspect Logistics in Ontario join the union, UFCW 1000A 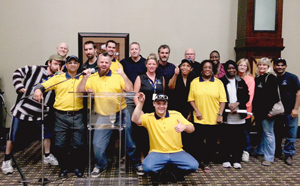 Ajax, Ont. – October 21, 2013 – Workers at Aspect Retail Logistics in Ajax, Ontario have voted overwhelmingly to ratify a first contract as the newest members of UFCW Canada Local 1000A.

As the results came in, there was hugging, jumping, dancing and crying at achieving union representation.

“It was just sheer joy, sheer jubilation—it was overwhelming,” said Richard Ramlogan, who worked for more than eight years at Aspect and who is a member of the bargaining committee. “I am still pinching myself – it is just unbelievable.”

The collective agreement comes as a result of a lengthy effort by Local 1000A to help Aspect workers win rights at their workplace. Despite facing setbacks along the way, workers were determined to form a union to achieve fairness at Aspect.

“We are proud to welcome our sisters and brothers at Aspect Retail Logistics into the Local 1000A family and commend them for taking a stand to create a fairer workplace for themselves and their co-workers,” said Pearl Sawyer, Local 1000A President.

The deal, which spans just over four years, ensures workers have rights in their workplace and no longer have to be on their own when dealing with the company.

“It is the greatest thing – it’s fabulous,” said Aspect worker and bargaining committee member Evaline Jno-Lewis about the new contract and being unionized. “Everyone is excited and happy – this victory was long overdue.”

Along with union representation, workers also achieved wage increases, job security for the life of the agreement and a formal process to raise concerns if their newly won rights are violated.

Aspect Retail Logistics is a third-party supplier to Loblaw. The workplace is a diverse one, with women making up about 50 per cent of the workforce and workers coming from a wide array of cultures.