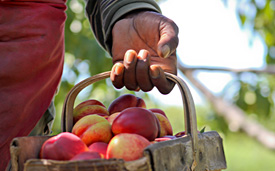 Toronto – March 26, 2013 – The Ontario Liberal government's announcement of new initiatives to promote awareness of Ontario-grown and processed foods "is a good start in acknowledging how important the sector is to our economy and to our communities," says Wayne Hanley, the national president of UFCW Canada.

"We certainly support the government's initiatives to promote a stronger Ontario agriculture sector. It is a vital industry and part of the fabric of Ontario. But at the same time, we are concerned the announcement falls short by not addressing the well-being of the more than 80,000 agriculture workers who are currently denied the same workplace rights and protections that most other Ontario workers take for granted," says the UFCW Canada leader.

The UFCW Canada leader was reacting to the announcement by the Ontario Ministry of Agriculture on Monday of its plan to re-introduce legislation – The Local Food Act – to promote awareness, marketing and sales of Ontario-grown and processed foods.