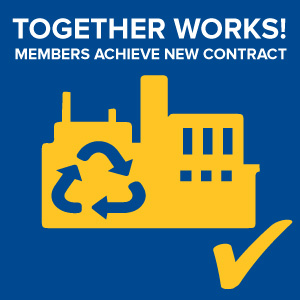 “When we welcomed the new members from NexCycle Guelph, we committed to working with the bargaining unit to improve their rights and livelihoods,” says UFCW 1006A President Wayne Hanley. “With this first collective agreement, we have achieved gains and have created a strong foundation for members to build on for the future.”

Negotiations were led by UFCW 1006A Union Representative Kevin Bacon, with support from members Yvonne Koplane and Ron Higgins. The contract runs until 2023 and covers approximately 20 members working at the recycling company.

Highlights of the new, three-year collective agreement include:

To read more about the new union contract at NexCycle Guelph, click here.