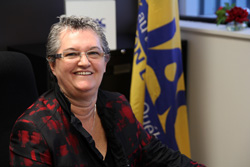 Sister Lefebvre is a long-time UFCW Canada activist who first became active in the labour movement shortly after starting work as a cashier at Steinberg in 1978.

As member of the Local 503 Executive Board since 1992, Sister Lefebvre has served the membership and community as a leading voice for greater fairness, equality, and LGBT rights, in particular, for more than 20 years.

“It is with great pride and excitement that I undertake to serve the Local 503 membership as their President,” says President Lefebvre. “I am very eager to work with Local 503 members, officers, staff and community partners to strengthen our achievements and to combine our efforts in building a higher standard of fairness for workers and their families.”

“On behalf of the Local 503 membership, I would also like to express my sincere thanks to outgoing President Steeve Bégin for his tireless work and dedication,” says Sister Lefebvre.