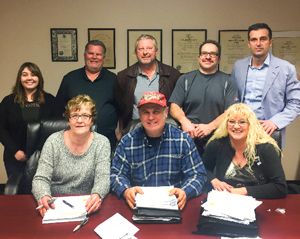 Members secured growing wages over the next five years covered by the contract. Each year will see increases to the end and progression rates. Part-time wage progressions receive additional adjustments as they accrue seniority to ensure that employee’s wages remain above the minimum wage set by the province. The first end-rate increase is retroactive for hours worked since the expiry of the previous agreement, and members in the progression grid will receive a signing bonus of up to $100.

Additional gains include improvements to the safety shoe allowance to $100, up from $75; a minimum four-hour call-in  guarantee for all full-time employees; and new language giving members more say as to which Union Steward they would like representing them at meetings.