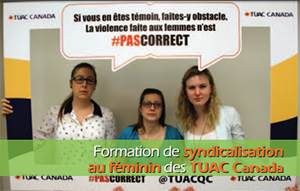 Montreal – July 18, 2016 – After taking the UFCW Canada course on Women Organizing Women, which was offered to UFCW members across Quebec this past April, UFCW Canada Local 500 member Marianne Desabrais has put her training to use by participating in a successful campaign to unionize workers at the Bulk Barn store on Henri Bourassa in Montreal.

“During the UFCW Canada training session on women organizing women, I found it interesting to be able to exchange ideas with activists from across Canada, and meet like-minded women who want to get more involved with their union,” says Marianne. “It’s important for us to mobilize women members and get together to exchange ideas on women’s issues in the workplace,” she adds.

“When I started organizing, I had no idea what it would entail. I saw it as a new challenge; mostly as a chance to be engaged in my union,” says Marianne. “When we were organizing at Bulk Barn, I met a worker who had contacted our union, and she could not believe the working conditions that the employees had to endure,” she adds.

The workers at Bulk Barn said “Yes!” to joining UFCW Canada Local 500 following a major organizing campaign this past June.

“This experience has made me realize how important a union can be in dealing with injustice in the workplace, and I’m glad that the workers at Bulk Barn will now enjoy the benefits of belonging to a union family,” says Marianne.