UFCW Canada reaches out to Otomi communities in Mexico 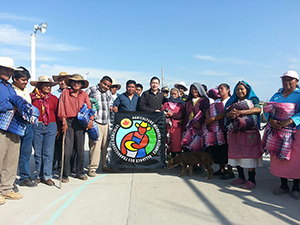 Hidalgo, Mexico – January 25, 2016 – Renewing its commitment to achieve justice and dignity for migrant workers, regardless of their migratory status or nationality, UFCW Canada recently donated hundreds of blankets to Otomi communities in the Mexican state of Hidalgo.

Nearly three percent of the thousands of workers who participate in Canada's Seasonal Agricultural Workers' Program (SAWP) hail from the Hidalgo region, which is located about two hours north of Mexico City.

The indigenous communities living in Hidalgo face conditions of poverty, exclusion, and outmigration well above the Mexican national average. Elderly people – many of whom are former migrant workers – are especially vulnerable, and opportunities for them to participate in the weak local economy are minimal.

With the onset of winter, the blanket donation was welcomed with great enthusiasm by the Otomi communities, particularly among the elders in the region.

For more than two decades, UFCW Canada has led the fight to obtain workplace rights and health and safety protections for agriculture workers in Canada. In association with the Agriculture Workers Alliance (AWA), UFCW Canada operates a number of AWA support centres in major agriculture communities across the country.