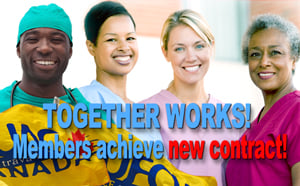 Fernbrae Manor is an assisted-living community that provides a comfortable, small-town environment for its residents. The 35-member unit consists primarily of healthcare workers at the facility.

The new four-year contract features a variety of improvements including important changes to job security language and sick bank eligibility.

As per the new deal, members will also receive an over 8% increase in compensation over the duration of the contract. There are also improvements to contract language and night shift premium pay.