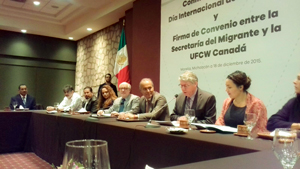 Morelia, Mexico – December 21, 2015 – UFCW Canada and the Mexican state of Michoacán have signed a mutual collaboration agreement to protect the human and labour rights of Michoacán migrant workers in Canada.

UFCW Canada National President Paul Meinema and Secretary José Luis Gutiérrez of the Michoacán Migrants Secretariat (SEMIGRANTE) signed the agreement on December 18th in Morelia, the capital of Michoacán. The date is significant as it marks International Migrants Day. The state of Michoacán has one of the highest migration rates in Mexico.

The pact with the newly-elected government of Michoacán builds on earlier working agreements established with previous administrations since 2009. Under the new agreement, UFCW Canada and SEMIGRANTE will focus on increasing outreach capacities for both organizations to ensure that training, advocacy, information services, and monitoring efforts improve outcomes for Michoacán migrant workers in Canada.

As in previous years, UFCW Canada will provide information to Michoacán migrant workers to help them access social benefits; distribute basic human and labour rights materials; provide access to information and support via a toll-free Agriculture Workers Alliance (AWA) phone number; and offer increased assistance and protection for workers through the AWA support centres. With the new agreement in place, SEMIGRANTE and UFCW Canada have renewed our pledge to ensure a stronger voice and better rights-monitoring for Michoacán workers in Canada.

"We will work on creating a more organized migrant community going forward," said Secretary José Luis Gutiérrez. "And we must create spaces for dialogue between authorities, migrant communities, and international allies," he added.

"We are fostering long-term alliances that will have a significant impact on migrant workers' lives," said Paul Meinema, the National President of UFCW Canada. "Our union is excited to participate in this collaboration agreement with SEMIGRANTE, as we strive to protect the human and labour rights of Michoacán migrant workers in Canada," he added.

UFCW Canada is the country’s most progressive union and has led the fight for migrant workers' rights for more than two decades. In association with the AWA, UFCW Canada operates agriculture worker support centres across the country.