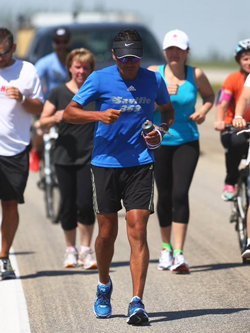 The two-day journey spanned two provinces from Regina, Saskatchewan to Brandon, Manitoba – a trip that would take over three-and-a-half hours by car. Altogether, Bert raised over $23,000 to help raise funds to support those with Huntington's Disease (HD).

Huntington's Disease is an inherited degenerative brain disorder with devastating effects on both the mind and body. It causes a person to become less able to control their body movements, emotions and memory.

Brother Blackbird has participated and completed various marathons before, but this run was personal to him as he has very close friends, who are affected by HD. "This family has had such an impact on my life that I feel compelled to help eradicate this disease," expressed Brother Blackbird. "There currently is no cure for Huntington's Disease, but hopefully one day I can run a celebratory run announcing there is a cure."

Brother Blackbird works at the Maple Leaf plant in Brandon, Manitoba as a plumber in the maintenance department. He is also a worker representative on the workplace Health and Safety committee.