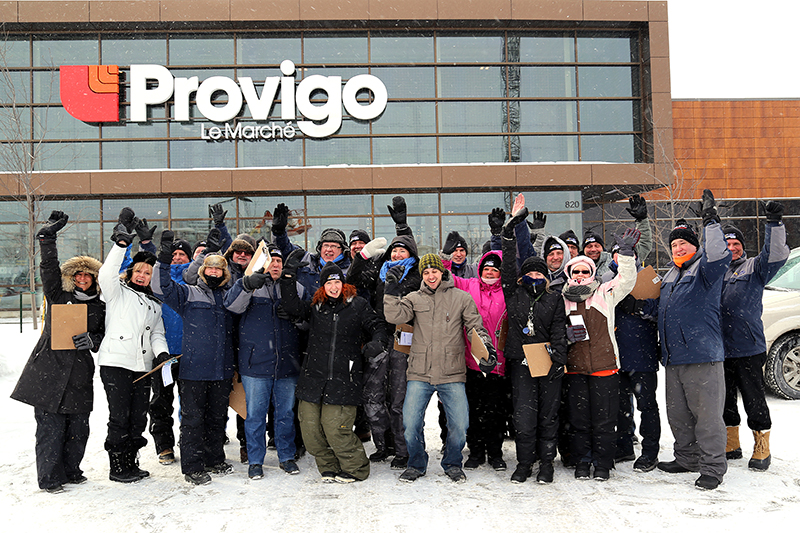 Blainville, Que. – March 2, 2015 – The parking lot outside the newly opened Provigo Le Marché de Blainville was teeming with activity on Valentine’s Day, February 14, 2015, in spite of a frigid temperature of –25°C, and a wind chill of  –31°C. But the cold didn’t stop a team made up of 26 UFCW Local 500 union representatives from warmly greeting the new grocery store’s staff with a message that by joining our great union, they would make the voice of all workers in the food retail industry stronger.

The efforts of the organizing team were successful, for on this single day, the vast majority of workers at the new store signed UFCW Canada membership cards. Later that day, UFCW Canada Local 500 filed an application for certification with the Commission des relations de travail (‘‘Quebec’s labour relations board’’) to represent the more than 100 new members who had decided to add their voice to that of the 30,000 members who are already part of the largest local union in Quebec.

UFCW Local 500 President Antonio Filato proudly hailed the work carried out by the Local’s union representatives. ‘‘Once more, the UFCW Canada Local 500 team has demonstrated that, if we are united, we can accomplish great things together,” said Brother Filato. “It is encouraging to see that, in all situations, solidarity can make a difference. That is exactly what was shown by servicing, bargaining, health and safety and legal services representatives when they responded positively to the appeal that the organizing team had made.’’

‘‘We are very happy to see that workers at Provigo Le Marché de Blainville have chosen UFCW Canada Local 500 to represent them. Together we will strive to improve their working conditions. As soon as the Commission des relations de travail has issued a union certification, will start the process to negotiate a first collective agreement’’.