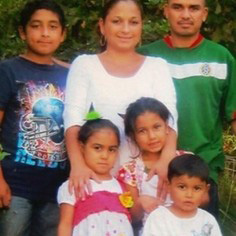 On February 24, Daniel Lopez is going to lose his job. Daniel works in a warehouse in Mira Loma, California, moving goods for Walmart day in and day out. With what he is paid for unloading hundred pound boxes from containers in the broiling heat, Daniel supports his four young children, two daughters and two sons. He works extremely long hours, usually six days a week, yet still is paid only poverty wages for this grueling work. He has no holidays, sick days, or health insurance.

Daniel and his coworkers are now fighting back and they need your help.

In a bid to stand up for their basic human rights, Daniel and 69 of his coworkers filed a law suit in September 2011 based on Walmart's failure to meet the minimum requirements under US wage law. Since that time, the workers have reported being threatened and harassed and have now been told they will lose their jobs on 24 February.

UFCW Canada is adding its voice to a growing number of leading organizations around the globe who are calling on people to show Walmart that the world is watching and they don’t like what they see.

Sign this petition now to show Walmart that activists in Canada stand beside Daniel and all his Brothers and Sisters working in Walmart warehouses.

The petition calls for Walmart to put in place a responsible contractor policy obligating contractors it does business with to observe certain standards to protect workers. This would mean a living wage, benefits and a guarantee of respect for workers' legal rights.

Stand with Daniel Lopez and other Walmart warehouse workers! Sign the petition!