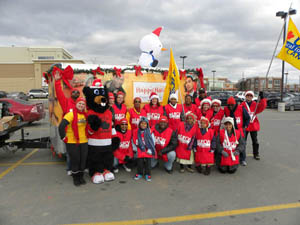 Christmas came early to Milton, Ontario, as thousands of parade-goers recently took to downtown streets to take in holiday floats and attractions at the annual Santa Claus Parade.

Wearing red union vests, UFCW Canada Local 1000A members, activists and staff marched in the parade and handed out Chap Sticks and candy canes. Local 1000A also created its own float, with wreaths, a Christmas tree, a giant snowman and lots of red and gold ribbons.

“It was an amazing day and I want to thank everyone for coming out and participating and showing the community another positive side to the union,” says Diana O’Brien, a steward at Milton’s Real Canadian Superstore. She helped coordinate the union’s participation in the event with Local 1000A Co-Coordinator of Organizing Jonathan Lobo.

“It was a total team effort with everyone giving a 110 per cent,” adds Sister O’Brien.

The parade started at Bronte Street and ended at Milton Mall and drew people of all ages and cultures.

“It was a huge success,” says Mary-Joe Eaton, a steward at Kretschmar. “The parade was a great way for us to further connect with our communities.”

Local 1000A’s Bob the Beaver mascot, Santa Claus and his elves also made a special appearance at the parade.