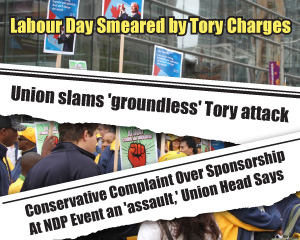 National President Wayne Hanley says fundraising allegations filed by the Conservative Party of Canada against the NDP just before Labour Day were "a groundless, strategic assault on the labour movement, and on ordinary Canadians who are fed up with the vicious, partisan politics the Harper Conservatives are so proud of."

Brother Hanley was responding to a letter filed on September 1, with Elections Canada by the Conservative Party of Canada. The letter alleged the NDP might have broken fundraising rules by allowing unions, including UFCW Canada, to advertise events at the NDP national convention in Vancouver last June.

"The Conservative Party is well aware that advertisements at fair market value are allowed by Elections Canada. There is nothing amiss here, and UFCW Canada respected every rule and regulation in an open and completely transparent manner. It was cynical timing, so typical of the Conservatives, to launch this smear on working Canadians and their unions on the eve of the annual celebration of the achievements of the labour movement."

A national poll conducted last week reported that in the wake of the death of NDP leader Jack Layton, a majority of Canadians wanted toxic partisan politics to end. The poll also reported that national support for the NDP had moved up to match the Harper Conservatives.

"A week later you have the Conservatives attacking the NDP with flimsy allegations they know are untrue," said the Brother Hanley. "Making this smear is the same bunch that Elections Canada charged with sloshing around $1.3 million in 2006, as part of an in-and-out scheme that exceeded spending limits and allowed Tory candidates to claim rebates on phony expense claims."

"Canadians of every political stance have gone on the record that they want a return to decency, integrity, and an end to partisanship. Obviously the Tories have chosen to ignore the message."