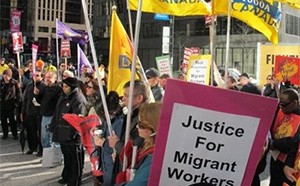 Ottawa– June 20, 2014 – Union with more Temporary Foreign Workers members than any other in Canada says TFW program is “broken” and today’s announcement is just another knee-jerk response by the Harper Conservatives instead of real solution.

Ottawa – June 20, 2014 – Canada’s largest food workers’ union is disappointed by the Harper government’s lack of leadership in fixing the Temporary Foreign Workers program, and is challenging the Ministers responsible for Employment, and Citizenship and Immigration – Jason Kenney and Chris Alexander – to look to some of the country’s unionized meat industry as a model example of balancing the legitimate needs of employers with the dreams of immigrant workers and the needs of Canada.

“The Temporary Foreign Workers system is broken, and this latest announcement by Minister Kenney is yet another example of the Harper Government’s refusal to roll up its sleeves on an issue that is so central to the future of Canada,” says Paul Meinema, the national president of the United Food and Commercial Workers (UFCW Canada), representing more than a quarter of a million workers across the country, including more than 40,000 workers in the Canadian food processing industry, where TFWs now play an essential role.

“Today’s announcement does nothing to change a system that still allows irresponsible employers to exploit workers with impunity, and the Harper Conservatives are only now acknowledging problems with this file because a number of irresponsible employers. These employers got their hands caught in the cookie jar by placing TFWs in service sector jobs where there clearly wasn’t a need, and Canadians are rightfully outraged. The TFWP was never designed nor enforced to distinguish between abusing employers and those where there is a genuine labour market shortage.”

“That said, we as Canadians need to be equally concerned that – despite today’s announcement – the program remains a place where workers remain stuck in a cycle of overwhelming precariousness, where the path to permanent residency and citizenship is a faint hope to many people stuck in the system."

“Canadians have told us time and time again that we need a government that understands that the well-being of our industries, communities and country for the next generation is being determined by this program, and to succeed that program must be based on the Canadian tradition of immigration as a basis for nation building and economic growth,” adds Meinema.

UFCW Canada represents more temporary foreign workers than any other union in Canada; yet, UFCW Canada, as the national union with the greatest number of migrant worker members, was never consulted by the government about possible changes to improve the TFWP.

Through language negotiated in collective agreements, UFCW Canada Locals have worked with several unionized employers to make the Temporary Foreign Workers Program into something it is not – an immigration program.

Over the last several years, UFCW Canada contracts with unionized employers like Cargill, HyLife Foods, Maple Leaf, and Olymel have resulted in hundreds of TFWs gaining a true chance to build a life in Canada, and make lasting contributions to their local economies.

“If it wasn’t for the union and the provincial nominee program here in Manitoba, I wouldn’t be a permanent resident,” says UFCW Local 832 member Tao (Chris) Yu, who works at the Maple Leaf pork plant in Brandon, Manitoba.

Since gaining permanent residency through his collective agreement, Yu has been joined by his wife, and started a family in Manitoba, with the birth of their Canadian-born son.

“I now own a house in Brandon, my family and I work hard, pay taxes and we are proud to call Canada our home,” adds Yu.

President Meinema says, “Today’s announcement is very similar to the so-called reforms we saw after the HD mining and RBC embarrassments, in that we still have no specifics with regard to what the scope of enforcement measures are and which departments are actually‎ enforcing these new amendments. Previously, the government has acknowledged they really have no ability to enforce the TFWP regulations in any meaningful way.”

“There is no long term strategy here. This is merely an additional bandage on a broken system. What Canada needs is robust immigration, not a robust migration program to fill genuine job shortages.”