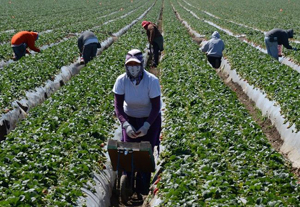 Toronto – May 9, 2014 – The Assembly of Catholic Bishops of Ontario (ACBO) has released a report supporting the call for equitable access for agriculture workers to the same labour rights and workplace benefits as other workers in Ontario. The report, Fruit of the Earth and Work of Human Hands, raises 10 key issues regarding agriculture including environmental stewardship, ethical consumer choices, as well as the protection and promotion of the human and labour rights of agriculture workers, including the right to organize.

The Agriculture Workers Alliance (AWA) welcomes the new report from the ACBO. The AWA represents more than 13,000 domestic and migrant agriculture workers across Canada. Together with UFCW Canada, the AWA has been engaged in a dedicated, unwavering struggle to secure the right to organize for agriculture workers and has achieved a number of collective agreements in Quebec and British Columbia. In a recent victory, the B.C. Labour Relations Board ruled that the Mexican consulate violated the rights of agriculture workers when it blacklisted those who supported unionization with UFCW Canada Local 1518.

Ted van den Hurk, Vice-President of the Christian Farmers Federation of Ontario (CFFO) also voiced his support for the report. Recognizing that equitable treatment of agriculture workers is an integral part of a safe and sustainable industry, the CFFO vice-president pointed out that the Catholic Bishops of Ontario have supported the call for equal rights for migrant and domestic agriculture workers for many years. The CFFO is supported by 4,000 farmers across Ontario.

"On behalf of the more than 13,000 members of the AWA and more than 250,000 members of UFCW Canada, we welcome the support of the Catholic Bishops of Ontario in the demand for fairness and equity for agriculture workers," says Paul Meinema, UFCW Canada National President. "The discrimination must end. Agriculture workers in Ontario, migrant and domestic, must have access to the same labour rights and workplace protections as all other workers in the province."