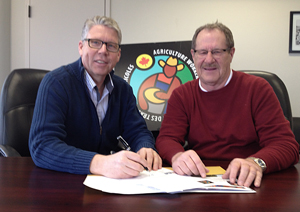 Toronto – ­­May 3, 2014 – The Agriculture Workers Alliance (AWA) has renewed a benefit plan to provide accidental death and dismemberment insurance for its members. UFCW Canada signed the renewal agreement with AIL Canada, the life insurance company that has provided this important benefit for AWA members since 2011.

The agricultural industry is one of the most dangerous sectors in the Canadian economy. Migrant workers employed in this sector continue to be one of the most precarious and vulnerable workforces in the country. The AWA and UFCW Canada have been engaged in a historic struggle to secure basic human dignity and labour rights for migrant agriculture workers.

In an often hazardous and perilous industry that provides few protections, accidental death coverage is crucial not only for migrant workers themselves, but for their families living in countries such as Mexico, Guatemala, Jamaica, and the Philippines. The insurance policy is available at no cost to all AWA members and their families. This benefit has contributed in no small way to a dramatic increase in the AWA membership during the past few years, which currently stands at more than 13,000 members.

“While we continue to fight in the courts and in the fields to achieve social justice for migrant agriculture workers, providing accidental death and dismemberment insurance is of paramount importance for AWA members and their families,” says Paul Meinema, UFCW Canada National President. “On behalf of the more than 13,000 members of the AWA, I express my sincere gratitude to AIL Canada for providing this coverage.”