International President Hansen on workers and the fight against income inequality 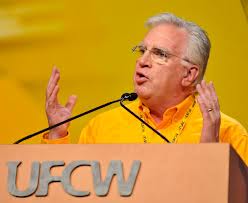 President Obama's focus on income inequality during his State of the Union address, along with his intention to raise wages for federal contract workers, was a step forward for the low-wage workers across the country that have been fighting for better wages and benefits. While Congress continues to block President Obama's effort to increase the federal minimum wage, workers have taken the lead in tackling income inequality by sticking together and challenging big corporations to change the way they do business.

Walmart – the world's largest retailer – is a good example of how one company's low-wage, part-time business practices have helped to widen the gap between the rich and poor. Many of Walmart's 1.4 million workers are struggling to cover the basic necessities like food and shelter and have been forced to rely on taxpayer funded supports like food stamps and Medicaid. As the largest private employer in the country, Walmart can afford to pay its workers more. The company made $17 billion in profits in the last fiscal year, and just six members of the Walton Family -- heirs to the Walmart empire -- have a combined family fortune that is estimated to be over $144.7 billion, which is greater than the wealth held by 42 percent of American families combined. But instead of being a good corporate citizen, Walmart has retaliated against and, in some cases, fired workers who have spoken out for positive changes in the workplace -- actions that have prompted the National Labor Relations Board to announce that it will prosecute the retailer for its widespread violations of workers' rights.

That's why, for the past few years, current and former Walmart workers who are members of the Organization United for Respect at Walmart (OUR Walmart) have banded together for a voice on the job. Members of OUR Walmart have called on the retail giant to publicly commit to providing more full-time jobs with wages that can support workers and their families, and ending its practice of illegally targeting workers who are simply exercising their right to speak out for a better life and improved working conditions. These brave men and women have influenced other workers in the fast-food industry and beyond to stand together for better wages and benefits -- actions that prompted President Obama to put raising the minimum wage at the top of his agenda.

As the gap between the rich and poor continues to grow, members of OUR Walmart, fast-food workers and others will continue to take action through protests and strikes, but more must be done by President Obama and Congress to level the playing field. Increasing the federal minimum wage, vigorously defending and protecting the right to organize, and holding corporations like Walmart accountable for driving down the standard of living for millions of Americans would be a good start.