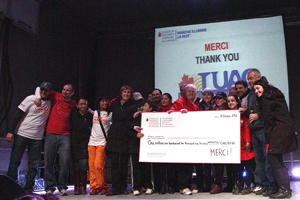 Montreal – October 27, 2013 – UFCW Canada Local 500 and 501 activists and family members recently joined thousands of other participants for the 8th Annual Light the Night Walk in Montreal. The fundraising event, held at Parc Jean-Drapeau (the site of Expo 67) was in support of the lifesaving research of the Leukemia and Lymphoma Society of Canada (LLSC).

Thanks to the efforts of UFCW Quebec combined with other LLSC fundraisers, the October 19 walk set an all-time record by raising a record $1,110,917.48 — including $200,000 raised by the UFCW Quebec team. The record total made the Montreal walk the most successful Light the Night Walk so far this year in Canada.

‘‘This is a cause to which we are especially committed to, for it has touched many who are close to us including UFCW staff and members," says Antonio Filato, the president of  the UFCW Quebec Provincial Council. "The tremendous research efforts of the LLSC have led to breakthrough treatments that have saved lives and allowed thousands of people to return to a normal life. Through our support of the LLSC, we unite our voices with theirs in the goal to find a cure for all blood cancers," says Brother Filato.

‘‘We are especially proud that over the past five years, UFCW Quebec has raised over one million dollars for the LLSC and the Light the Night Walk. What has made this all possible is the support, hopes, and the invaluable commitment of members to find a cure. And throughout the year, they keep on giving — knowing that every dollar they give can make a huge difference!"