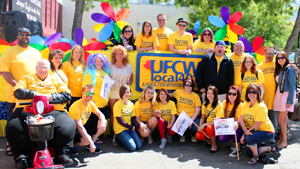 Edmonton – June 19, 2013 – UFCW Canada Local 401 activists recently took pride in Edmonton by standing with more than 30,000 community members in the city’s most successful PRIDE parade ever.

Local 401 celebrated PRIDE with a beautifully decorated float and more than 40 members walking the parade route – all proudly wearing and waving UFCW gold.

“The importance of the labour movement showing its support physically and not just paying lip service is undeniable,” says Local 401 President Douglas O’Halloran. “It is imperative that union members and non-union workers alike know that there is a collective voice to help champion the message of equality for all human beings.”

Local 401 has a long history of promoting and supporting diversity and LGBTQ rights in Alberta. The 2013 Parade is the fourth Edmonton Pride Parade in which the Local Union has participated, and 401’s float in this year’s Calgary Pride Parade on September 1, 2013 will mark its seventh year of participation.

Every year, the City of Edmonton celebrates PRIDE with a 10-day festival celebrating the city’s lesbian, gay, bi-sexual, transgendered and queer community.