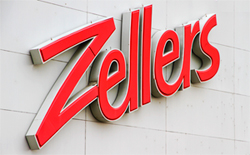 Montreal – March 21, 2013 - While the vast majority of Zellers stores have ceased operations, including those locations purchased by American retail giant Target, one Quebec store under the Zellers banner has survived the wave of closures.

The recently renovated Montreal Nord Zellers store will not only continue to remain open, but is also staffed by UFCW Canada Local 500 members.

Last fall, members at the store ratified a three-year collective agreement. The new contract provided salary increases, and better severance benefits in the event of a store closure. While some workers availed themselves of the severance benefits, the majority of the members preferred to keep working.

“This is a great victory for the Montreal Nord Zellers workers," says UFCW Canada Local 500 President Tony Filato. "As union members, they were able to negotiate with their employer. Sadly, this was not the case for the 5,000 non-union Zellers workers in Quebec who are now out on the street because Target schemed to sidestep the Labour Standards Act to avoid recognizing their past service."

"While other Zellers workers were left in the dark about their future, our union members took measures to have their voices heard and to protect their rights," says Brother Filato. "Union membership also helped Local 500 members at the Terrebonne Zellers store whose location did unfortunately close, but because it was unionized we were able to negotiate enhanced severance packages for the members."