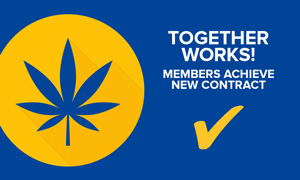 “There is a reason that 75 percent of the private dispensaries in Victoria have organized with our local union,” says UFCW 1518 Secretary-Treasurer Patrick Johnson. “Cannabis workers are realizing that with a union they can have a voice at work, and the more they join the movement, the more power they would build.”

The new contract comes with a 15 percent increase to starting rates, guaranteed wage increases, improvements to breaks and scheduling, in addition to many union security provisions. BC Budtenders Union – a division of UFCW 1518 – has now secured a collective agreement in every bargaining unit certified since a green wave of union organizing swept B.C.’s recreational industry after legalization in 2018.

To read more about the collective bargaining victory at Seed & Stone, click here.

Are you a non-unionized worker who would like to enjoy the benefits of a UFCW Canada union contract? Do you and your co-workers want to gain the union advantage at work? Join Canada’s best union, UFCW Canada, to make your workplace better today. Click here to join now.