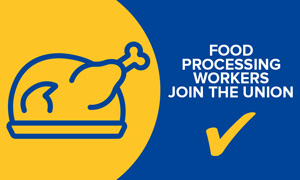 Saint-Damase, Qué – August 19, 2022 — On July 5, a certification application was made by the United Food and Commercial Workers Union to represent the lab workers at the Exceldor plant in Saint-Damase. In a decision made on July 27, 2022, the Quebec Tribunal administratif du travail (TAT) confirmed the certification of UFCW Local Union 1991P.

The quality control workers of this specialized poultry processing plant trust that it is with UFCW that they will obtain real power because our Union negotiates working conditions for all their members. Amongst the reasons that have motivated their desire to join UFCW Local Union 1991P are the improvements to wages, respect for their working conditions and better protection against unjust and random decisions by the employer. The certification application, following the workers wish to unite their voice to UFCW Local Union 1991P, was made by the Union with the Tribunal administratif du travail (TAT) on July 5, 2022, and was certified on July 27, 2022.

In the following days, a negotiating committee will be created to prepare the new members’ list of demands. This committee will include lab workers and will be assisted by a solid and experienced union team.

UFCW Local 1991-P represents over 6,000 members at more than 60 companies across Quebec. To learn more about UFCW 1991-P, visit the Local Union’s website.