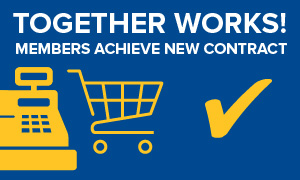 “Banff IGA members pushed the parent company Sobeys to do better and refused to give up on what they knew was a fair offer,” says UFCW 401 President Thomas Hesse. “Workers stood strong and gained an improved contract that the majority of members felt was worth accepting – truly what being in a union is all about.”

To read more about the collective bargaining victory at Banff IGA, click here.