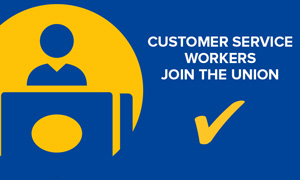 North Bay, Ont. – May 17, 2022 – Customer service agents at Bearskin Airlines working out of the North Bay, Ontario airport are the newest members to join UFCW 175 & 633 after securing a successful certification from the Canada Industrial Relations Board (CIRB), which oversees federally regulated industries such as airports and air transportation.

“These workers made it known that they wanted to be part of our local union and the organizing team did a great job supporting them through this campaign,” says UFCW 175 President Shawn Haggerty.

The North Bay workers join UFCW members from other Bearskin Airlines locations across Manitoba and Northern Ontario and are looking to address wages and job security, among other issues, in negotiations. As federally regulated workers, the new members secured their certification through the card-check process, bypassing the board-mandated vote, as is common in provincial jurisdictions.

To read more about the organizing victory at Bearskin Airlines, click here.

UFCW Canada Locals 175 & 633 represent more than 70,000 hard-working Ontarians in almost every sector of the economy. To learn more about the outstanding work of UFCW 175 & 633, visit the Local Union's website.