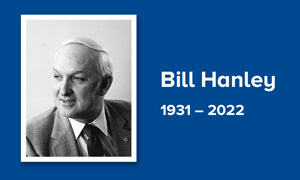 Bill is widely remembered as one of the union’s builders. As a butcher at The Great Atlantic and Pacific Tea Company (A&P), Brother Hanley served a central role in organizing his workplace and welcoming thousands of A&P employees to UFCW Local 175 in the 1960s. From there, Bill represented Local 175 members in a number of roles, including President, and was instrumental in laying the groundwork for Local 175 to eventually become one of the largest Local Unions in North America.

At the same time, Brother Hanley provided leadership to the national and international union as an International Vice President and the Canadian Director of Region 18. Working with UFCW leaders across the country, Bill Hanley was a leading force in unifying the Canadian regions of the union and in creating the national union as it is known today. Bill provided national leadership to the newly-established UFCW Canada, and continued to serve as a leading voice on the UFCW International Executive Board until his retirement.

“With the passing of Bill Hanley, we are mourning the loss of one of UFCW Canada’s founders and builders, and we are all very grateful for his exceptional legacy to our union,” says UFCW Canada National President Paul Meinema. “UFCW Canada’s strength today – as Canada’s leading voice for workers – would not have been possible without Bill’s lifelong dedication and leadership to the union.”

A private service for family will be held to celebrate Brother Hanley’s life.