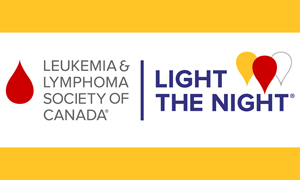 November 2, 2021 – UFCW activists and Local Unions across Canada recently helped raise hundreds of thousands of dollars through a virtual Light the Night gathering and live-streaming broadcast that brought communities together in a solidarity of purpose, despite the challenges of COVID-19.

In a typical year, participants gather in person for Light the Night fundraising walks, carrying lanterns to symbolize survivors, supporters, and in memory of loved ones lost. But because of COVID-19, this fall’s walks were replaced by a virtual gathering on October 23rd. Combined with hundreds of other teams and sponsors, the virtual event raised more than $6 million.

Altogether, UFCW Canada sponsorship and teams in British Columbia, Alberta, Saskatchewan, Manitoba, Ontario, Quebec and the Atlantic provinces raised more than $345,000 through the recent Light the Night event.  Earlier in October, an additional $200,000 in donations was also triggered by the UFCW Canada family’s fundraising success, through a matching program that stimulated an additional $200,000 from other donors.

In addition to participating in Light the Night events, UFCW activists and Local Unions participate in other fundraising activities throughout the year in annual campaigns that conclude in June.  In 2020-2021, UFCW Canada members and Local Unions raised more than $ 2.1 million dollars.

Over the past three decades, the UFCW family of activists and Local Unions have raised over $47.2 million and continue to be the largest annual source of fundraising for the life-changing and lifesaving work of the LLSC.