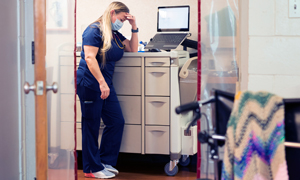 Mississauga, Ont. – February 3, 2021 – In a scathing rebuke of the Ford government’s response to the crisis unfolding in Ontario’s long-term care homes, UFCW 175 President Shawn Haggerty wants to see an end to a system where profits are put before people.

“The Ontario healthcare system has been dangerously mis-managed for decades,” says UFCW 175 President Shawn Haggerty. “Our elected government has focused on profit for shareholders, not on providing care for residents.”

As the pandemic continues to expose the vulnerabilities of an already haphazard system of eldercare, UFCW 175 is calling on the Ford government to implement concrete solutions that would bring an end to carnage unfolding in the province’s long-term care homes.

Along with advocates in the Ontario Health Coalition, UFCW Canada vows to keep the pressure on the Ford government until these critical changes are made.

Listen to the full remarks, here.