UFCW advocates for members in airline industry on NDP roundtable 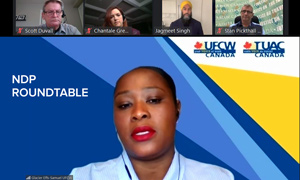 Toronto – December 5, 2020 – UFCW recently advocated for increased financial support for workers in the airline sector as part of a New Democratic Party roundtable discussion exploring the impacts of COVID-19 on this important industry.

The online panel brought together labour unions representing workers in all facets of the airline and aerospace sectors, from pilots to air traffic controllers to food service workers at various Canadian airports, as well as NDP MPs responsible for critic portfolios relating to Canada’s airline industry.

During the virtual meeting, UFCW Local 1006A Recorder Glacier Effs-Samuel spoke about the challenges that thousands of UFCW Canada members working in the airline sector are currently facing thanks to the COVID-19 pandemic, and the struggles that members are encountering due to a massive decline in air travel throughout the country.

Sister Effs-Samuel explained that UFCW members in the airline industry mainly work as food service workers, bartenders, security guards, and car rental representatives at airports from coast to coast, and that their frontline work is essential to ensuring the smooth operation of Canada’s airports and a valuable guest experience for travellers.
However, thousands of UFCW Canada members have either been laid off or have lost their jobs in this sector, and enhanced government support is urgently needed to help affected workers and protect the long-term viability of the industry, she said.

“UFCW Canada members in the airline sector need swift action from government to avoid falling through the cracks,” Effs-Samuel told the panel. “Specifically, our union would like to see strengthened measures around the Canada Emergency Wage Subsidy, because food service and customer service workers cannot make ends meet on Employment Insurance benefits alone.”

Later in the panel, participants heard from NDP Leader NDP Jagmeet Singh, who said the federal government’s support for Canada’s battered airline industry lags well behind interventions seen elsewhere in the world, and that much more needs to be done to assist workers in this sector. Singh vowed to fight for airline workers to ensure they get the help that they need, and he thanked the panel participants for providing insights on the issues facing airline workers on the front lines of the pandemic.

As Canada’s leading union, UFCW Canada believes that political action is essential to achieving a better life for workers and their families. Our union engages in politics because the decisions made by political parties and elected officials impact UFCW Canada members in their workplaces, homes, and communities. To learn more about our union’s work in the political realm, visit the UFCW Canada Political Action webpage.