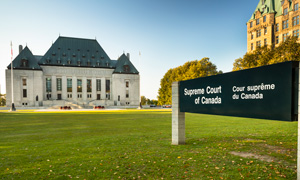 Toronto – June 26, 2020 – UFCW Canada welcomes the Supreme Court of Canada’s ruling that Uber’s mandatory arbitration process is invalid and inaccessible to drivers – paving the way for Uber drivers to be recognized as employees.

The Supreme Court case, known as Uber v. Heller, revolved around the arbitration provision contained in every Uber Service Agreement that the company enters with drivers and which drivers must sign before being able to work for Uber using the company’s ride hailing app. Under this provision, all driver disputes with Uber are required to go through arbitration in the Netherlands, a process that the Ontario Court of Appeals said amounts to illegally outsourcing an employment standard.

In a historic ruling, the Supreme Court upheld the Ontario Court of Appeal decision, deeming Uber’s arbitration agreement invalid and inaccessible to drivers and stating that a driver cannot reasonably be expected to incur the financial and legal costs required to arbitrate a dispute in the Netherlands.

The ruling comes as a result of driver David Heller, who works for the company’s Uber Eats food delivery service, filing a class action lawsuit seeking a minimum wage, vacation pay, and benefits for drivers amounting to $400 million in damages. Heller argued that when he entered into a Service Agreement with Uber in June 2016, the company misclassified him as an independent contractor rather than an employee, and that Uber failed to abide by the minimum labour standards outlined in Ontario’s Employment Standards Act (ESA).

In a major victory for Uber drivers and ride hailing, app-based employees in Canada, the June 26 ruling clears the way for Heller’s lawsuit – arguing that Uber drivers are employees and are entitled to protections under employment standards legislation, including the right to join a union – to proceed, and paves a path for Uber drivers to be recognized as employees.

The ruling also comes exactly one year after hundreds of Uber Black drivers in Toronto joined UFCW Canada, calling for fair pay, respect, and the right to collectively bargain.

“This decision confirms what our union has been arguing all along – that Uber consistently prevents drivers from exercising their rights as employees of the company,” says Paul Meinema, the national president of UFCW Canada. “Uber’s completely inaccessible arbitration process is just one example of how the company regularly stifles the rights of its workers, and we are pleased that the Supreme Court has rendered this process invalid.”

“With this Supreme Court ruling, Uber drivers are one step closer to gaining more rights, representation, and respect on the job,” says Pablo Godoy, National Co-ordinator of Gig and Platform-Employer Initiatives for UFCW Canada. “It has been a long and grueling journey, but we are on the right trajectory for achieving justice for Uber drivers and other app-based employees in Canada.”