Created in 2004, IDAHOBIT seeks to raise awareness of the discrimination and violence that is experienced by lesbian, gay, bisexual, transgender, questioning, intersex, and two-spirit (LGBTQI2S) persons around the world. The commemorative date of May 17 also coincides with the 1990 World Health Organization (WHO) decision to declassify homosexuality as a mental illness.

From a global perspective, Canada is a leader in supporting IDAHOBIT. In fact, IDAHOBIT originated with Fondation Èmergence in Quebec and received unanimous support at the 2006 Declaration of Montreal on Lesbian, Gay, Bisexual, and Transgender Human Rights. Internationally, IDAHOBIT is observed in over 130 countries and is commemorated by United Nations agencies and a multitude of organizations worldwide.

This May UFCW Canada, along with UFCW OUTreach were proud to join 600 plus participants at the International Lesbian, Gay, Bisexual, Trans and Intersex Association (ILGA) world conference.

At the conference, UFCW OUTreach led a workshop on the crucial role that unions have in dismantling discrimination for LGBTQ+ youth at work and strengthened our solidarity with labour unions working to end discrimination on the basis of gender identity, expression and sexual orientation around the world.

The conference also provided opportunities for the sharing of community strategies being employed by worker organizations on a global scale to protect LGBTQI2S rights. This June, UFCW Canada will also lead a discussion on this issue at the Fierté Canada Human Rights Conference.

As we head into pride season, honouring IDAHOBIT provides an opportunity to reflect on our accomplishments and the work ahead to protect the rights of UFCW LGBTQ+ members at work.

For more information on our union’s efforts to advance LGBTQI2S rights, visit UFCW Canada’s “Supporting LGBTQI2S Rights” webpage, and be sure to check out our work with UFCW’s constituency group for LGBTQ12S issues and advocacy, UFCW OUTreach. 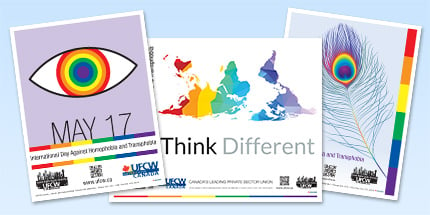